skip to main | skip to sidebar

please be sure to visit our new and improved website...!!!


Todd
Posted by True Bread at 8:41 PM No comments:

Can the NWO actually cause an earthquake...???


Todd
Posted by True Bread at 7:57 PM No comments:

HI everyone,
I have finally been able as of tonight to catch up on all of the videos that had to be edited, and posted online.
This round of studies are from the radio program. Instead of posting all of the links to this email, I will just send out my Youtube link, as it has every video uploaded to it already, as well as the website.
Also, this attached article is just more proof of the NWO's drive to total world domination and control. However, I still think that Obama is just another foolish trusting useful idiot being manipulated by his handlers to fulfill the dictates of the powers behind the scene. Otherwise known as the NEW WORLD ORDER...
This article is from "Sorcha Faal".... but the information has already been verified by other outside sources... still use your own discretion about the source and information in the article....
http://www.whatdoesitmean.com/index1546.htm
My Youtube site: (all videos uploaded as of today)
http://www.youtube.com/user/kingair001?feature=mhee
Alex Jones new documentary on Obama: MUST WATCH (please share)
http://www.infowars.com/watch-alex-jones-landmark-documentary-fall-of-the-republic-in-hq-free-online/
My website:
www.truebread.us
Keep the faith,
Todd
Posted by True Bread at 8:38 PM No comments:

Hi everyone,
Over the years, I have had the opportunity and privilege to send out 100's of emails, and to communicate with all of you on my email list for True Bread, and I am very thankful for the chance to do so....
However, this is probably the most serious and dangerous letter I have ever had to write and to submit to this list of like-minded individuals. I gave serious consideration to calling this a RED ALERT message, but decided against that as to not appear hysterical.
However, you can decide for yourselves as to the critical nature of this email....
This message will focus on the latest product from the fourth reich known as the NDAA:
the "National Defense Authorization Act"
As many of you know, I was working as an airline pilot on 9-11, and was stuck in a hotel room in Missouri for three days, as there were no flights allowed to come get the crews that were stranded. 9-11 has changed my entire life. I am not in the moon to reconstruct that scenario just now, but be assured it altered the course of my existence, and has focused my attention on the NWO and their operatives... and in some ways has lead to True Bread.
After 9-11, we have been treated, as American citizens, to the most draconian and vicious "laws" a human mind can even begin to perceive. How is it, that AFTER a "supposed" enemy attacks this great nation and peoples - on our own soil - that now WE are somehow the suspects, and that we as "patriotic" Americans are now subjected to the most humiliating and disgusting treatment imaginable, all in the name of "security"..??? Is it not imaginable that this so-called "terror attack" was the catalyst that has produced such abusive laws in the first place, and that maybe this event was actually planned and orchestrated by the NWO to in act the very laws that we are subject to today...???
As most of you on this list are well-educated and intelligent humans, I will not waste your time refreshing your memory of the events that have taken place in this nation since that dark day over a decade ago now. However, please remember that one of the most evil byproducts of 9-11 was the PARTIOT ACT. This rights-stripping piece of filth known as "legislation" is one of the most abusive forms of law to come out of Congress since there ever was a Congress. And all in the name of "security". Most of this law was negotiated in SECRET, and not even members of Congress themselves could even read it... all in the name of "security".
Prior to this little gem of a law, came "PDD 51". Most reading this probably have no clue as to what this term means, or even is... but I do. PDD 51 is the Executive Order that gives the President virtual dictatorial control over EVERYTHING in this nation, should an "event" warrant such actions. Who determines the exact defintion of such an "event" is still a mystery, but unknown to most Americans is that we are STILL currently under a STATE OF EMERGENCY since, and because of, 9-11.
But, this is all WINDOW DRESSING compared to what happened in YOUR NATION a few nights ago. Actually the NATION that you thought you lived in is now DEAD and no longer exists after December 1 2011.
Now, with the passage of the NDAA (National Defense Authorization Act) all of us can be considered TERRORISTS...!!! That's right... your illustrious Federal Government has decided, in the Senate, to consider ANY CITIZEN it wants to be a "threat to the Homeland" and can be dispensed of accordingly.... which more than likely means a FEMA camp, or worse.... Just as the American citizen in Yemen was targeted for assassination, maybe you will be, too... And the beauty of it all is, for the NWO of course, is that NO ONE can question their decisions, all in the name of "security".... After all, who in their right mind would dare question the Dear Leader on any issues involving "security"...???
You and I, right now, no longer live in the concept formally known to us since childhood as the "United States of America"... You and I now live in a land that should correctly be called the TYRANNICAL STATES OF AMERICA..... and are being ruled by a DICTATOR appointed by Goldman Sachs.
Now, we are all ENEMY COMBATANTS according to the NWO.... exactly like the way all citizens of Germany were "suspects" just prior to WW II.....
Welcome to the FOURTH REICH, as prophesied in Revelation 13....
Here are a few links to support my position:
http://disquietreservations.blogspot.com/2011/12/military-occupation-of-america-by.html
http://www.whatdoesitmean.com/index1543.htm
and the main link:
http://www.youtube.com/watch?feature=player_embedded&v=l3t4wgZCO5M
Bonus: Gerald Celente interview (must watch)
http://www.youtube.com/watch?v=SKR9VZ6N-rk&feature=relmfu
Obviously, I will be discussing this NDAA law over the next few days and weeks on the radio and television programs and will be sending out emails and alerts as appropriate....
Please follow the links and do your own research, and remember to PROVE ALL THINGS to yourselves....
Keep the faith,
Todd
Posted by True Bread at 7:05 PM No comments:

Hi everyone,
I just wanted to give all of you an update on a situation that is developing concerning Obama, that I think is of an urgent nature, that has strong ties to Operation Blackjack.
Today I read an article online that revealed how "someone" had hacked into Fox News Twitter account and had posted a "tweet" that Obama had just been assassinated earlier in the day. Thankfully, it was only a sick joke..... but of course as soon as I read the article, I immediately thought back over the last three years about what I have been saying on this subject, and that how Obama is doing everything within his powers to make himself look like a madman, and that he is coming across as a dictator hell-bent on destroying this nation. Obviously, this ties directly in Blackjack, as the perpetrators in Blackjack seek a return to the way things were, by eliminating Obama.
Also, recently it has been stated that the "Wikileaks" site is nothing more than a CIA opearion to slowly release information that aids the CIA in their goals and is nothing more than a smokescreen used to confuse the public about what to believe or not believe. Is it then therefore beyond imagination to think that the CIA could be using these "hackers" to drop the concept into American's consciousness that possibly someone may want to kill Obama...??? I see the handwriting on the wall on this one...
Here is the article:

Keep the faith,
Todd
Posted by True Bread at 10:19 PM No comments: 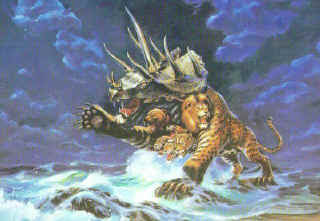 In Revelation 13, we read about the mysterious beast with "seven heads and ten horns" that has terrified and confused humans ever since it was written in 90AD. Many different and bizarre theories have been put forth to explain this enigmatic vision.

However, in our modern day and age, it is very simple to identify these "heads and horns".

I have been stating very clearly now for over five years on television, and in our home bible studies, the identity of this symbolism. Now, I am doing the same on live AM radio here in Ashland VA, on WHAN 1430 AM.

Here is the identity of these strange and misunderstood symbols:

Seven Heads: G7, the "Global" gang of industrialized nations, which is a part of the G8/G20 group of world leaders.

Ten Horns: the "Ten Zones" of the planet that has been pre-determined by the "Club of Rome" and the Committee of 300, that basically controls and runs the entire planet, started by none other than David Rockefeller himself.

Now, please someone tell me.... what else on this entire earth even comes close to this exact line-up of seven powerful world rulers, controlling 10 zones of a split-up planet...??? THERE IS NOTHING ELSE....!!! If we are in the "end-times", as indeed we are, what is everyone else lookiong too or waiting for....??? the BEAST SYSTEM IS HERE NOW. It is everywhere, all aroung you constantly, and you CANNOT get out of it without DIVINE PROTECTION.

True Bread
work as a flight instructor for a local flight school, and as director of True Bread.